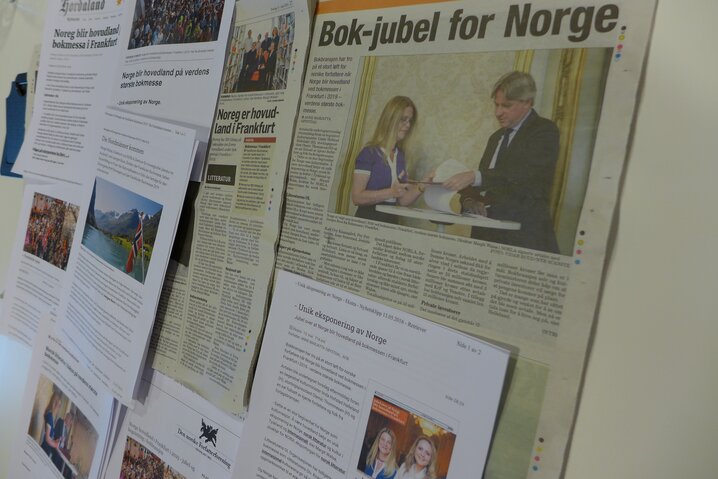 Trine Skei Grande, Member of Parliament and chair of the Liberal party, received much acclaim when she shared all the things she’s proud of on this day of the signing of the agreement.
Tone Skogen, State Secretary in the Ministry of Foreign Affairs, emphasized in her speech among other things the many possibilites for Norwegian culture abroad and also declared that the Norwegian embassies abroad are ready to join forces with this huge national initiative.
Juergen Boos, director of the Frankfurter Buchmesse convinced everyone present that Norway is indeed warmly welcomed as the Guest of Honour in Frankfurt in 2019. He also expressed admiration for the way the entire book industry as well as other fields of culture in Norway has embraced the opportunity and how everyone seems willing to contribute to this national “dugnad”.
Then followed the signing of the agreement by Margit Walsø and Juergen Boos, which was followed by enthusiastic applause by the audience.
Last, but by no means least, the eloquent author Erik Fosnes Hansen offered an amusing glimpse into the “truth” of the Frankfurt Book Fair, as seen from the author’s perspective.

See more pictures from the signing ceremony at Facebook.

There has been substatial media coverage of the event, including live TV- and radiotransmission from the whole ceremony.
See the broadcast and hear all speaches here (some in English, most in Norwegian, and one in both in English and German).

The German Börsenblatt was the first German media to report the event.

The news has also hit The Bookseller.

Links to all Norwegian media coverage here. Some of the Norwegian articles are also available for download at the bottom of this page.

Read more about the broad support for the Guest of Honour initiative, the Norwegian objective and the planned project organization here.

Finally, you will find all NORLA’s previous articles on the Norwegian initiative and the process towards the Norwegian application here.