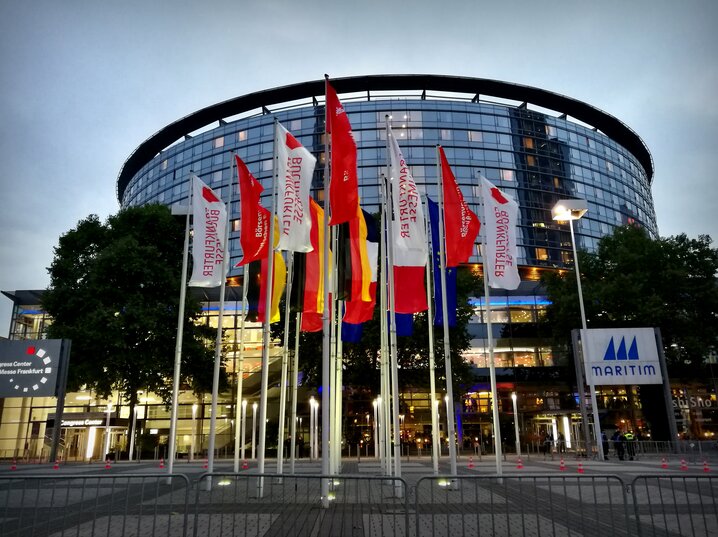 The motto for the project was ‘The Dream We Carry’. It derives from a poem by Olav H. Hauge. It expresses the wish we have that Norwegian literature and arts will open doors to and hearts of an international audience.
Read more about the poem.

For information about Norwegian literature, the project and all events in Germany, Austria and Switzerland please visit our Guest of Honour website: www.norway2019.com

About Frankfurter Buchmesse
Frankfurter Buchmesse is the world’s most important market place for the international literary and media industry and is held every year in October. The fair is the centre of the internationalmedia world and a major cultural event. Over 7,300 exhibitors from over 100 countries and around 286,000 visitors attend the book fair. The fair has 4,000 events and approximately 10,000 accredited journalists and bloggers are present. The book fair is a subsidiary of the German Publishers & Booksellers Association.

Norway as Guest of Honour
The Guest of Honour project comprises hundreds of events throughout 2019 and culminates at Frankfurter Buchmesse from the 16th to 20th of October 2019. At the book fair in 2019 the Norwegian presence was extensive: Norway had a pavilion of 2,300 m2 and many Norwegian authors were present.

Numbers and facts from the 2019 fair can be found here.

The Dream We Carry
Norway’s slogan as Guest of Honour at Frankfurter Buchmesse 2019 is ‘The Dream We Carry’. The slogan is derived from the poem ‘It Is That Dream’ by the beloved Norwegian poet Olav H. Hauge (1908-1994). Our dream is that arts and literature from Norway will open hearts and bring people to places they have not been before, “Into a cove we didn’t know”,’ says Halldór Guðmundsson, Project Manager of the Norwegian Guest of Honour project, quoting Olav H. Hauge’s poem.

Literary and cultural programmes
Norway uses its status as Guest of Honour to promote Norwegian literature and arts. The events took place mostly in German speaking countries, but the scope was international. Frankfurter Buchmesse is called ‘The global city of ideas’, and thus, with participants from over 100 countries, the book fair is an international arena.

Literary programme
The Guest of Honour status entailsdactivities throughout 2019. Through the literary programme, Norwegian authors and their authorships were presented to the world at Frankfurter Buchmesse and towards the German speaking audience in literary houses, festivals, book stores etc. all over Germany.

Over 230 Norwegian titles were be published in German translation in the course of 2018 and 2019. The literary programme evolved around these authors and their works, but other important writers were also included. The events buildt on our international success stories, renewing Norwegian literature’s foothold in Germany, while at the same time bring new voices to the German as well as international book market.

Cultural programme
In addition to the literary programme, we organised a comprehensive cultural programme in which all forms of art will be included. The cultural programme entailed exhibitions, concerts, and theatre, primarily in Frankfurt, but also other locations in Germany, throughout the autumn of 2019. Norway was also be the ‘Country in Focus’ the 2019 European Film Market (EFM) at the Berlin International Film Festival and partner country at Jazzahead! 2019 in Bremen.

Literature and the arts are unique starting points for dialogue, and for the exchange of ideas and knowledge. So we value both the literary and cultural programmes as platforms to raise questions and discuss topics important to Norway. As our writers travel and take part in events, they become part of an international dialogue concerning the arts, our future and freedom of expression, for which the Frankfurter Buchmesse has always been an important platform.