Norwegian Literature in China – "From Sophie to the World!" 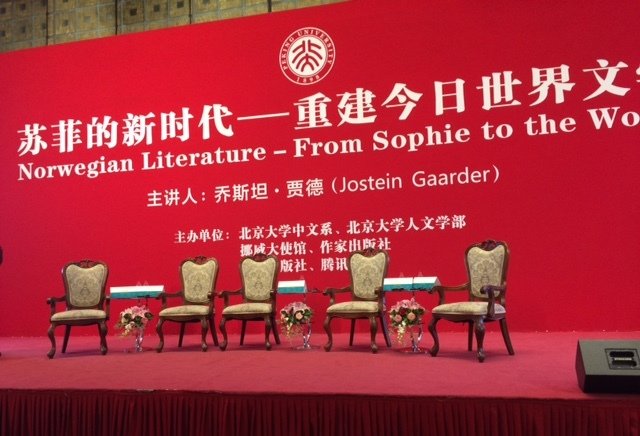 A Norwegian sports and cultural delegation led by Norway’s Minister of Culture, Linda Hofstad Helleland, visited China from 25 to 27 May. The delegation also included the author Jostein Gaarder and NORLA’s director, Margit Walsø.
Jostein Gaarder’s books are very well known to Chinese readers as a total of 16 have already been published in Chinese!
A central part of the delegation’s cultural programme was to renew and strengthen cultural collaboration with China.

On 25 May, ZHANG Fusheng, previously editor of Nordic literature at the People’s Literature Publishing House, was awarded the Royal Norwegian Order of Merit by the Minister of Culture, Linda Hofstad Helleland.

The Minister of Culture, Jostein Gaarder, Margit Walsø and other delegates met the director of China’s National Library, and visited students of Norwegian at the Beijing Foreign Studies University. They also took part in a seminar about Norwegian literature at Peking University entitled “From Sophie to the World”, during which Gaarder was presented with a trophy for selling three million copies of Sophie’s World in China. Peking University Literature department and the two publishing companies, Jieli Publishing House and Writers Publishing House, arranged the seminar in collaboration with the Norwegian embassy. The seminar programme included an introduction to Norwegian literature, a conversation with Jostein Gaarder and a panel debate between Gaarder and Chinese academics in the fields of literature and philosophy.
Gaarder attracted a great deal of interest among both public and press!

ZHANG Fusheng, a former editor of Nordic literature, Bejing, was awarded the Royal Norwegian Order of Merit (Knight First Class) for his valuable work promoting cultural links between Norway and China, particularly in the field of literature. The Minister of Culture, Linda Hofstad Helleland, presented him with his award. ZHANG Fusheng was editor of Nordic literature at the People’s Literature Publishing House, where he was responsible for publishing works by Ibsen and Hamsun, among others.

Jostein Gaarder and one of his Chinese translators, LI Jingjing.

Gaarder spoke on the topic, “Why should children read philosophy” when Jieli Publishing House launched seven of his books in a new philosophy series for young readers.

Norwegian Literature and NORLA in China
Norwegian literature has enjoyed an unprecedented boom in China and Taiwan in recent years. Ever more authors are achieving success with both Chinese readers and critics. Children’s books and non-fiction are especially popular.
Read about NORLA’s activities in China here.

Click here to see the covers of many of the Norwegian books that have been published in Chinese with translation support from NORLA (up to and including 2011).

NORLA presents informational material about current Norwegian literature in both Chinese and English at the major Chinese book fairs.
See the selection from the past two years (Beijing and Shanghai Book Fairs) here.

The Norwegian delegation was met with interest by the Chinese media. See some of the articles here, here and here.

Interested in reading more of NORLA’s letters from abroad?
Now we’ve collected all the articles here.