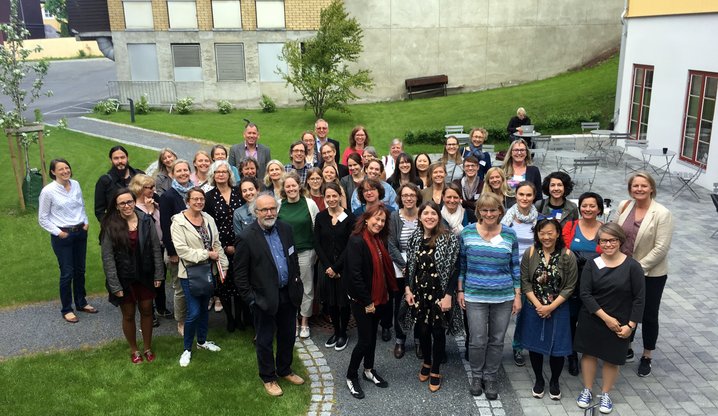 Norwegian and international publishers, agents, translators and authors gathered at the annual seminar in Lillehammer.

Translators seminar
This year we invited German translators of literature for this important target group, as a prelude to Norway being Guest of Honour at the 2019 Frankfurt Book Fair.

The translators met the author Sigbjørn Mostue, who is taking part in NORLA’s New Voices programme. He gave an inspiring introduction to his writing, in particular his latest trilogy, Tomorrow Everything Will Be Dark. All the translators had translated the first chapter of the award-winning first book in the series, Tomorrow Everything Will Be Dark: Brage’s Story, and discussed different challenges posed by the text.
It is always instructive for us at NORLA to see that the work of nine different translators can result in as many as nine different solutions/readings of the same text, none of which are “wrong”. The translators also offered enthusiastic feedback about how useful they always find it to discuss different solutions with others.

As well as holding the seminar, we also organised a trip to Maihaugen open-air museum, which is more like a little town; there we visited several of the houses which are equipped down to the tiniest detail with artefacts from the 70s, 80s and 90s. A very popular journey back in time!
(Picture: The translators took a deep dive into Norwegian culture and history during a visit to Maihaugen).

The German translators were also invited to meet Minister of Culture Linda Hofstad Helleland. They gave her an extremely useful introduction to the practical work of translating. And they also told her how important it is to meet colleagues at seminars like the one in Lillehammer – to exchange ideas, build networks and spend time in Norway bringing themselves up to date on current Norwegian literature and meeting authors. They also gave the minister concrete examples of what NORLA’s translation support means when it comes to publishing books in German – both classics and new titles. In many cases the support is enough to encourage a publisher to take a chance on authors who aren’t already known to German readers, and for them to opt to publish a new translation of a classic rather than simply reprinting an old edition.
(Picture: Minister of Culture Linda Hofstad Helleland, here in the middle, was given an introduction to the practical work of a translator).

As well as taking part in the translators seminar, NORLA’s translators were invited to participate in the closed seminar for foreign publishers arranged by NORLA and the Norwegian Publishers Association, where they were introduced to no fewer than 13 current children’s and YA authors and their books. Together with the publishers, the translators also visited Sigrid Undset’s home, Bjerkebæk – another high point on the programme.

Last but not least, the translators were able to pick and choose from the festival’s extensive programme, and many took the opportunity to meet “their” authors over the course of the festival.

This year’s annual publishers seminar marked two milestones for NORLA and the Norwegian Publishers’ Association: it was the largest group of publishers ever and it was the first time we had arranged a seminar solely for publishers of children’s and YA literature! The group consisted of 10 German publishers and 10 publishers from the United Kingdom, the USA and Canada.

Pictures 1 and 2: Librarian Anne-Kari Holm and publisher Svein Størksen gave the international seminar participants an interesting presentation on Norwegian children’s and YA literature.

We launched the seminar at Holmen Fjord Hotel in Asker on Tuesday 30 May. Librarian Anne-Kari Holm and publisher Svein Størksen gave presentations on Norwegian children’s and YA literature before the publishers met their colleagues from Norwegian publishing companies.
The next morning, we started the busiest day on our schedule with a refreshing dip in the fjord before travelling into Central Oslo to visit Samlaget, Cappelen Damm, Gyldendal and Oslo Literary Agency (OLA). Both Samlaget and OLA had waffles on offer, and OLA added to the “Norwegian” feel of things by greeting us in national costume.
After a quick trip to the National Gallery, we took the train to Lillehammer, where our next stop was Sigrid Undset’s home, Bjerkebæk. There we also met the German translators who were attending NORLA’s translators seminar.

Thursday marked a new milestone: with no fewer than 13 authors and illustrators on hand, a total of 18 titles were presented at the seminar in just three hours! The level of the presentations was extremely high and the seminar participants told us they were impressed by the professionalism on display.
(Picture: Author Ingunn Thon was one of several writers to present their books during the seminar).

Later, we went up to Maihaugen for the festival’s evening event, before rounding off the night with dinner at the Maihaugen’s atmospheric Kirkestuen dining room.
NORLA also took part in various festival events at Lillehammer: the panel debate ”Translated or Overlooked?”, which dealt with translations of children’s and YA literature, and an event entitled “Success abroad – flourishing at home?”

We thank the translators, Sigbjørn Mostue, the publishers, the authors and all of our collaborators for a highly productive festival – both professionally and socially!