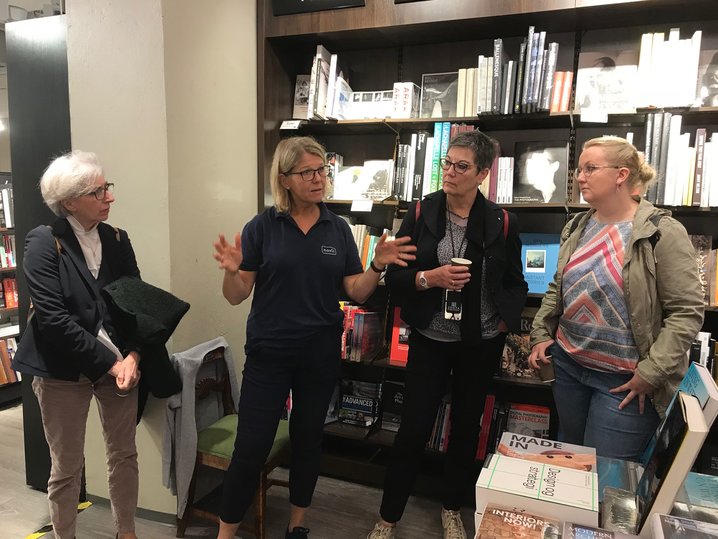 The book fair in Leipzig was the starting point for the bookstore initiative in connection with the Frankfurt project. German bookstores are being included in a far more rigorous way than previous guest countries have done. The groups consist of a good mix of large and small bookstores, online bookstores, children’s bookstore, the German Booksellers and Publishers Association (Börsenverein) and distribution chains.

The authors who the bookstores met, are all translated into German, and this year is promising to be a record year for translations of Norwegian literature, based on high demand from German publishers wanting to translate Norwegian titles. At the time of writing, we know of 200 Norwegian titles that will be published in German translation during 2018 and 2019. Brave writing is important in Children and Young Adults literature, and the group were given inspirational presentations from Bjørn F. Rørvik, Gry Moursund, Ingunn Thon and Siri Pettersen at the forefront. The non-fiction program consisted of original material from the National Library’s archives, presented by Erling Sandmo, author of Uhyrlig. At Sognsvann we recieved an introduction to nature writing and campfire-lighting from Thomas Svardal and Torbjørn Ekelund, and on the adult fiction front we met Wencke Mühleisen, Erik Fosnes Hansen and Johan Harstad. The programs were rounded off with some exciting crime fiction by Samuel Bjørk, Torkil Damhaug and Lars Lenth. In addition to meeting authors the group visited a variety of different bookstores and also met Norwegian colleagues.

NORLA has already started the planning for new groups in 2019.

Our coordinator for the cooperation with German booksellers is Thomas Böhm.
The visit takes place in cooperation with the Norwegian Bookstores Association and Börsenverein des Deutschen Buchhandels.

The first group of booksellers outside The National Library of Norway.

The National Library is NORLA’s next door neighbour. Here author and historian Erling Sandmo presented treasures from the archives, among them original material included in his book Uhyrlig.

The second group of booksellers together with author Torkil Damhaug and staff from Cappelen Damm. Translator Karoline Hippe read in German.

Norwegian evening in the National Library’s beautiful Slottsbibliotek; The authors presented themselves to receptive audience of bookstore representatives.

The booksellers recieved a nice stack of German books, with personal greetings from the authors – such as this one from Siri Pettersen.

Out walking in the countryside, in true Nordic style.

There was an introduction to outdoor living and the participants practiced lighting a campfire with Torbjørn Ekelund og Thomas Svardal.

One of the participating booksellers, Jacqueline Masuck from Dussmann das Kulturkaufhaus in Berlin, has written four “short stories” about her visit to Norway.
Read them (in German) or simply look at the pictures here.