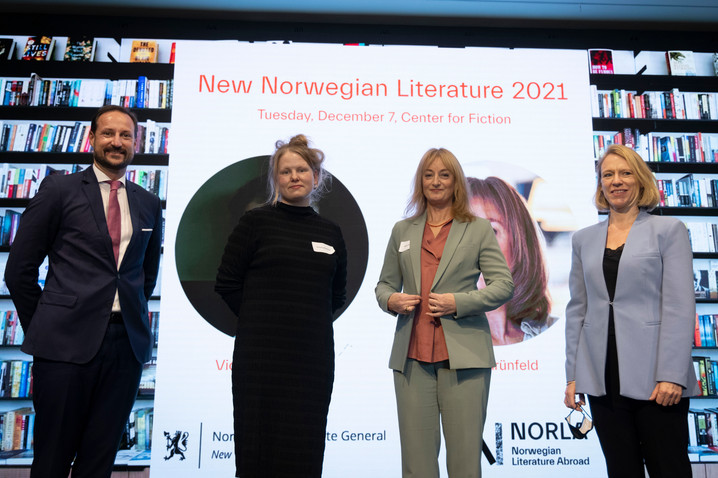 NORLA has not been in the US since September 2019, and the interest from those wanting to participate in our book trade meetings was huge. As many as 24 American editors, scouts and agents from 17 publishers and agencies signed up. Together we created a great event at the Center for Fiction in Brooklyn, on December 7th, which was opened by Norway’s Minister of Foreign Affairs Anniken Huitfeldt who thanked the American publishers for the important work they do in promoting Norwegian literature in the US. The authors presenting themselves were Victoria Kielland with her novel My Men, and Nina Grünfeld with FRIDA: My long lost grandmother’s war. The Crown Prince attended the event and spent a great deal of time talking to the authors and publishers during the lunch. After lunch, everybody went into the Members’ Lounge where the meetings of Norwegian agents and American industry contacts commenced.
Several of the agents expressed how important the trip was and said they had taken the opportunity to meet additional trade contacts who were not involved in the program.

The evening program continued at Scandinavia House in Manhattan at an event called Friluftsliv or Lost in the Mountains: Nature Literature from Norway with Torbjørn Ekelund & Are Kalvø. Torbjørn Ekelund took part digitally from Oslo where he talked about his latest book In Praise of Paths and showed exotic pictures from his campfire trips and winter camps. The evening was rounded off with stand-up comedy from Are Kalvø, who gave attendees a humorous glimpse of Norwegians and their relationship with nature. His book The Hiking Book from Hell is coming out in the UK and US in May 2022.