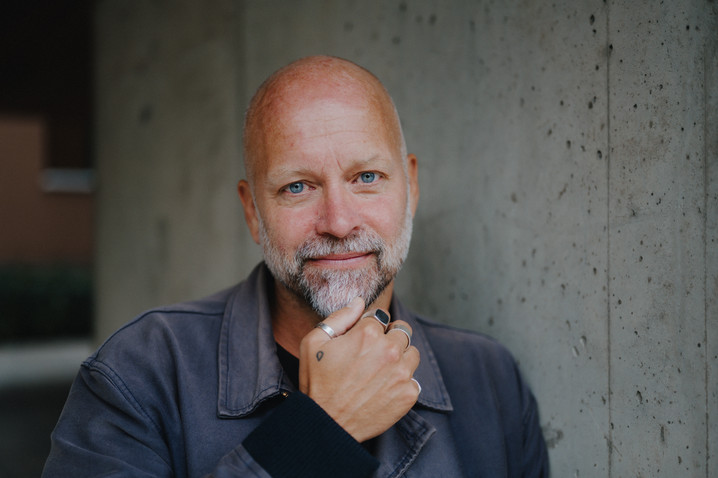 We are happy to present our selected title author Jens M. Johansson. He has written Family Values (original title: Familieverdier).
The book is one of NORLA’s Selected Titles of the autumn 2022.

Storm Sandberg is a former professional tennis player who has become a businessman. Family Values describes the delicate connection between wealth and ruination, between community and loneliness.
The self-deceptive Storm Sandberg has a winning personality, but loses both his wife and contact with his teenaged children. He suddenly doesn’t even have his own place to live, has barely enough money for food, and he starts – if possible – lying even more than he used to. Finally, in a desperate attempt to get back on his feet, he decides, of all things, to produce the Greek tragedy Medea for The People’s Theatre – as a musical.

Storm is the friend everyone has, who we adore, but who we often look at and ask: what on Earth could’ve possessed you to do that?

I wanted to write a defense for those who risk everything. And fail.

I’ve been thinking about how much us humans want to succeed, and how much we want those around us to witness it. Or at least believe that we do succeed. I’ve thought about how much people hide from one another, and how often we pretend everything is fine. Really, we all know how hard it can be to live, yet we keep our struggles to ourselves, and often we don’t even want those closest to us, those we live with, to know the truth. We want to be seen, but we don’t want to reveal ourselves. Maybe we believe that we’re impossible to like if people around us know what we actual think. I want to write about that. But in a comical way, where this collective deception presses on the fear of being caught out and revealed. I want to balance the humor with a solidarity with the characters in my novel. The human being is fundamentally comical and small. The human being is big and worthy of compassion.

The goal was to create something recognizable – both in its humor, desperation and gravity. Because I dearly hope that I am not the only one who feels like this.