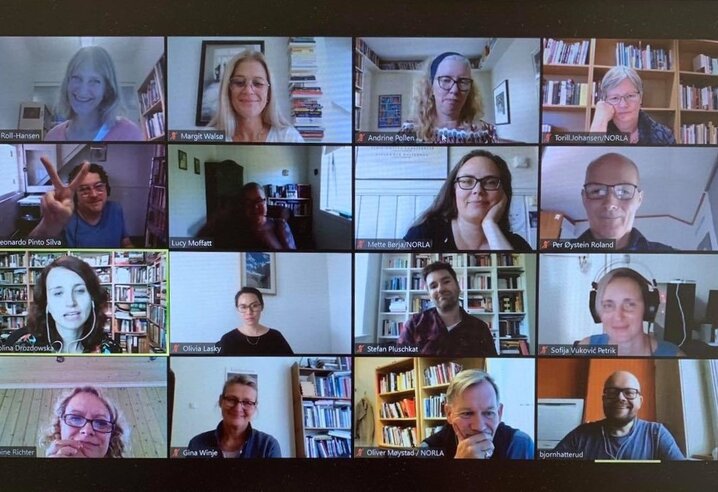 Happy participants in NORLA's translator webinar, with author Bjørn Hatterud at the bottom right. (One of the translators was not present when the picture was taken).
2020-09-23

The publishers’ webinars were attended by editors, publishers and scouts from six countries, who in addition to watching the films met 11 Norwegian agents – in their own digital “rooms” – for so-called speed dating. This effective seminar format allowed for 220 meetings to take place in the space of two days – 130 about fiction titles and 90 about non-fiction titles. There’s no doubt that Norwegian books are in demand!

“Even if our industry is all about the written word, the personal encounter with people from different countries means a lot to all of us. Therefore, I’m extremely thankful that NORLA made it possible to reconnect in this way.”
Christof Blome, Editorial Director, Ch. Links Verlag GmbH, Germany

At the translator’s webinar, eight translators from seven countries met to watch the films for selected non-fiction titles and participate in a workshop for Bjørn Hatterud’s Against Normality. The author himself and his agent, Gina Winje from Winje Agency, also took part. A number of very interesting issues and many concrete solutions were discussed in various languages. The group also watched a clip of beloved comedian Leif Juster’s famous sketch “Against normality”.

Bjørn Hatterud says:
“To be read by professional interpreters from different language areas gave me new ways of understanding my writing. It was informative and fun!”

Watch all the films on NORLA’s YouTube channel
– Or here, sorted via genre
NORLA’s selected title presentations can be found here