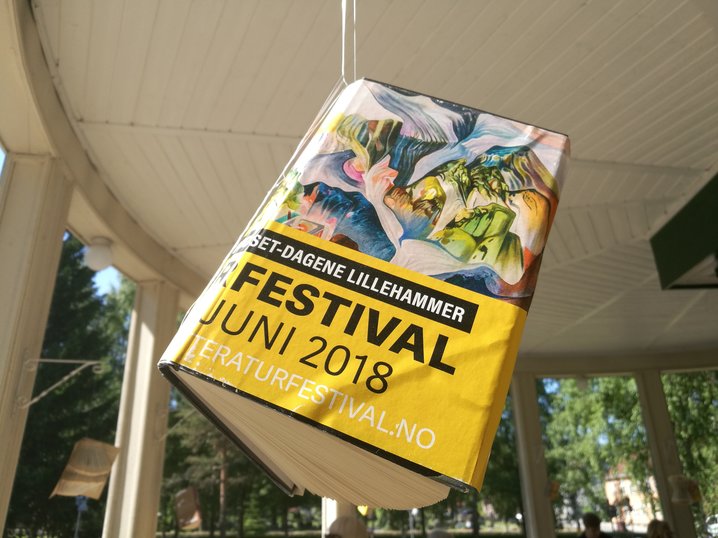 The translation seminar kicked off with the participants introducing themselves and what book they’re currently translating. This was followed by contributions from translators Barbara J. Haveland and Martin Aitken on the topic of “How do you translate literary style?”.
This was a fantastic prelude to the translator group’s meeting with author Tiril Broch Aakre, who has previously participated in NORLA’s “New Voices” program. She gave an inspiring introduction to her body of work and her last novel, Fjällräven gul, English working title: The Yellow Backpack.

Everyone had translated excerpts from the opening of the novel and discussed the different challenges in the text under the guidance of Karolina Drozdowska of Poland, who also teaches Norwegian at the University of Gdansk.
In addition to being an author, Broch Aakre is also a literary translator herself (as well as a publishing editor). Consequently, a scintillating discussion followed between the translators and an author who clearly sees and can objectively reflect upon her own text’s linguistic and cultural challenges through the eyes of a translator.

Questions that arose included:
Is the backpack brand Fjällräven known well enough in the translators’ homeland? What kinds of associations does the brand have there? Does the title of the novel make sense or should it be changed?
How do you maintain the rhythm of the original text and how do you indicate a shift in the dialogue, train of thought or other modes of action?
What should be done with quotes from Peer Gynt when the translation that currently exists feels too archaic? Is the translator obliged to use it?
And what about the references to Petter Northug? Is he known in the translators’ respective countries?

And on a more detailed level:
“Muttern” isn’t easily translatable to French, for example, and what words can reproduce the ambiguous answer “Jææh”?
And what is the best way of translating colours like “sjokkrosa” (hot pink) and “solgjennomstrømma lyseblå” (sun-filled light blue)?

In addition to the seminar, we also visited the Maihaugen friluftsmuseum (Maihaugen Open-Air Museum) – more specifically “the city” – where we were able to step inside several of the houses that have been decorated down to the smallest detail to match the decades in which they were built; the 70s, 80s and 90s – a popular journey back in time!

Following our own translation seminar, the participants were able to attend Forleggerforeningen (the Norwegian Publishers’ Association) and NORLA’s private seminar for international publishers, where they were introduced to five current fiction writers and their books.
The translators and publishers also visited Bjerkebæk, Sigrid Undset’s home – which was one of the program’s many high points.

Last but not least, the translators could pick and choose from the festival’s diverse offerings, and several of them also used the opportunity to meet “their” authors during the festival.

Over the course of these days, a multitude of events were offered on many different stages, and there were also several literary prizes awarded. (Read more in Norwegian here).
At this year’s festival – which was the warmest we can remember – the outdoor stage in Søndre Park was especially popular, particularly when the prize winners read aloud from and spoke about their books.

This year’s international publishers seminar was truly international, with representatives from France, Great Britain, the United States, the Netherlands, Belgium, Poland and Portugal – plus a Spanish scout who lives in Berlin and an Italian scout who lives in Istanbul. This is probably a record number of participant countries. And another record that was certainly set? The temperatures in Lillehammer! The festival city has never been warmer or more beautiful.
The intense two-and-a-half day program started in Oslo on Tuesday afternoon with a tour of the beautiful, newly refurbished National Library. Three New Voices authors held readings: Lars Petter Sveen, Lotta Elstad and Heidi Sævareid. The evening concluded with dinner at Grefsenkollen, where a fantastic sunset gilded the landscape.

Wednesday started with a quick round of visits to Cappelen Damm, Gyldendal, Oslo Literary Agency and a meeting with Pelikanen at Litteraturhuset, followed by an even quicker trip to either the National Gallery or Tronsmo Bookstore. After that, participants were able to rest on the train to Lillehammer before a tour and reception at Sigrid Undset’s home, Bjerkebæk, where festival director Marit Borkenhagen wished attendees welcome.

On Thursday morning, the main program took place: John Freeman held a fabulous lecture in which he spent 30 minutes taking the audience on a journey through Norwegian (literary) history – which was incredibly entertaining and even more enlightening. Next came author presentations one by one like a string of pearls: Tore Kvæven, Gine Cornelia Pedersen (who was unfortunately ill, but was brilliantly represented by editorial director Kari Joynt), Simon Stranger, Trude Marstein and Olaug Nilssen. Each so different in style and content, but all so wonderful! The guests were duly impressed by how skilled Norwegian writers are at presenting themselves in English.

At lunch, we were lucky enough to have a visit from Norwegian Minister of Culture Trine Skei Grande, who spoke about the importance of a country like Norway – with its full freedom of expression – holding its values high in meetings with the outside world, including as guest of honour in Frankfurt in 2019.
The afternoon continued with an intense “speed dating” round with the Norwegian agents, punctuated only by a quick swim in the Mjøsa for those who dared before ending with the literary gala in Maihaugsalen and dinner in the beautiful Kirkestua.

In connection with the literature festival, NORLA and the Frankfurt team organized a press tour for seven German journalists and influencers in both Oslo and Lillehammer. The participants met close to twenty-five Norwegian authors (!) and left feeling excited about both our literature and our country.
One of the participants has written about the journey on their blog, and we encourage you to read more at Kafeehaussitzer.

Listen to clips on German radio:
Deutschlandfunks Kultur – Lesart, Kultur heute and Sonntagsspaziergang.
Plus in BR Bayern and WDR 5.

And see photos on the Instagram profile for literarischesnerd.

We at NORLA would like to thank the translators, Tiril Broch Aakre, the publishers and scouts, all the authors who participated at the National Library, publishers’ seminar and press visit (including the train ride to Lillehammer), the agents, journalists and literary bloggers, as well as all of our partners. Last but not least, we would like to thank the attendees for a rewarding festival – both professionally and socially!

Read more
About NORLA’s seminars during the Norwegian Festival of Literature in Lillehammer here.

Check out the jam-packed festival program in English here and in Norwegian here.

Last year, the Norwegian Festival of Literature in Lillehammer, Sigrid Undset Days, was chosen as one of the world’s 20 best literary festivals by Penguin Random House, The Writers’ Academy.
Read more.

Interested in reading more travelogues from NORLA?
Find all our previous reports here.