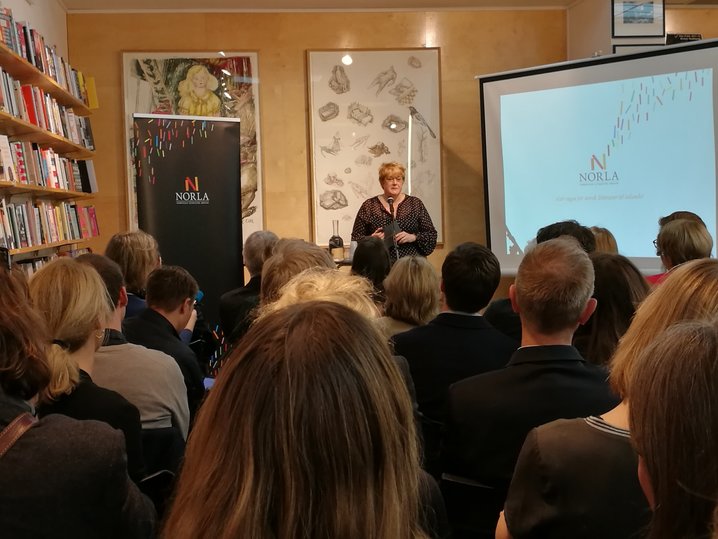 – The Frankfurt Project is the largest ever commitment to promoting Norwegian culture internationally, and will facilitate an increase in cultural exports. Furthermore, the project provides very good opportunities for reputation building and for the profiling of Norway and Norwegian business interests. Norwegian business and other institutions can see the opportunities this project provides, and I am very happy to see that more of them are now involved. Good cooperation between public and private players will make 2019 an unparalleled year for Norwegian culture abroad, says Trine Skei Grande, Norway’s culture minister.

New main partners
The project is widely supported by the Norwegian book industry, foundations and other organisations. Now the project has gained four new main partners: Thon Hotels, Norway Health Tech, Oppland County Municipality and Oslo Municipality, who will be partners of the project as a whole, and therefore able to use The Guest of Honour project as a platform leading up to and throughout 2019. Frankfurt 2019’s project manager, Halldór Guðmundsson, is delighted to have the project’s new partners on board.

- In Thon Hotels, Norway Health Tech, Oppland county municipality and Oslo municipality, the initiative has found the main partners that will lift the project. The partners make it possible, to an even greater degree, to exploit the potential that The Frankfurt Project brings with it, says Halldór.

House of Norway
The Frankfurt Project is not limited to the weeks, in October 2019, when the book fair takes place. As Guest of Honour, Norway will also have an extensive literature and culture program. The literature program will take place throughout Germany as of January 2019. The culture program will mainly involve exhibitions, concerts and the performing arts, in Frankfurt during the autumn of 2019. One of the highlights of the culture program is the exhibition at the Museum Angewandte Kunst (MAK). The entire museum will be devoted to our country’s art and culture, for a period of three to four months. The exhibition “House of Norway” will be curated by the museum’s director Matthias Wagner K.

- House of Norway is an invitation to Norwegian artists, designers, architects and other professional communities to showcase Norway and what ‘Norwegian’ is, in a surprising way, for a German and international audience. House of Norway is about our common future, about interaction between people, sustainability, the green shift and what we can learn from Norway, says Wagner K.

Two Norwegian institutions that are helping to make House of Norway possible are Visit Norway and the furniture manufacturer Vestre. Both are partners in the exhibition.

The culture program is a great opportunity for Norwegian participants wishing to become more visible or to increase their presence in the German market. There will be around ten major exhibitions in Frankfurt and the surrounding areas during autumn 2019. NORLA is inviting several business actors to become partners in the culture program.

Juergen Boos in Norway
Juergen Boos, the director of the Frankfurt Book Fair, will be visiting Norway in the near future to meet people within the culture sector, and gain a better insight into Norway’s literature and its culture. Boos has been in Norway several times in connection with the Guest of Honour project. His last official visit was during the proposals conference NORLA held in May 2017. During his visit he will, among other things, meet a number of authors and visit museums.