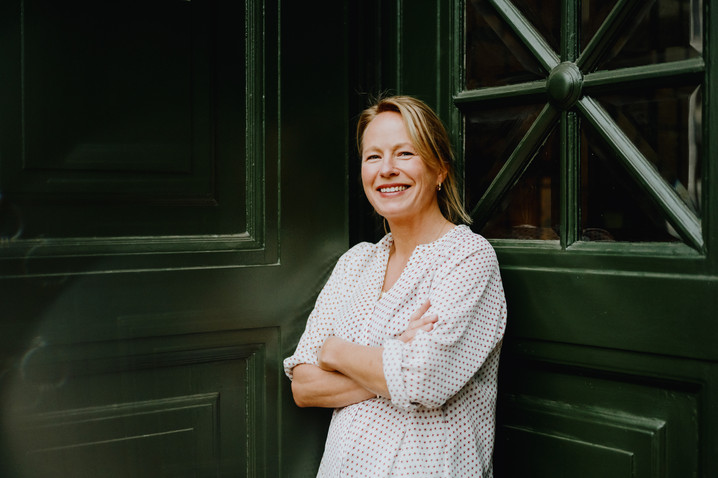 We are happy to present our selected title author Trude Marstein. She has written One’s Own Children (original title: Egne barn).
The book is one of NORLA’s Selected Titles of the autumn 2022.

My novel is about a publishing consultant, Anja, who is in her late 40s and divorced from an author, Ivar. Together, they’ve kept their croft in Sweden, which they bought when they were still married. Anja is now with Paul, while Ivar is with Solveig, and together, the two couples are going to meet at the croft to do some maintenance. Anja and Ivar’s two children, Lotte and Falk, are also present, as well as Anja’s adult daughter from a previous relationship and her new boyfriend, a psychology student called Adrian. These eight people try to complete the project and spend time with each other this weekend, with a wealth of goodwill, vulnerability and bitterness, to varying degrees of success. They wash and paint the house, and they spend their evenings drinking wine.
Interspersed the present action are uncountable shorter and longer snippets from Anja’s life, everything she hoped and strove for that didn’t come to pass, everything she misses, everything she regrets, but also a series of memories of lovelier moments, her life at its best, most harmonious and joyful.

I’m not a thematically driven writer, and have life and reality as my starting point when I write. Something both so simple and so complicated. I put people in the same space and see what unfolds. I still need some inciting idea, a conflict, some type of struggle, the characters must in some way be put at risk; something must be at stake.

I like to make the most of the least, to create tension and intensity where very little dramatic happens. I want to avoid gimmicks and cheap tricks, and build my novel on a strong sense of reality.

Something I think characterizes my books is that I’m not concerned with being visible as a writer. I’m not there to defend or judge my characters. They are left to their own devices, with all their simple and complicated and contradictory feelings and qualities, and so is the reader.