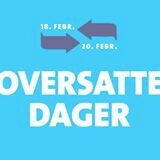 In conjunction with the translation festival “Oversatte Dager” (Translated Days) at the Norwegian House of Literature in Oslo, NORLA has once again this year announced a causerie contest for translators of Norwegian literature. Three winners have been chosen and they will perform their causeries on Saturday February 20, at 16.00.

The three winners are:

If you read Norwegian, you will find the three causeries here: Éva Dobos, Katarzyna Tunkiel and Daniela Syzcek.