The Ballad of a Broken Nose is a wonderful novel that fortifies Arne Svingen’s position as one of Norway’s foremost writers for children and adolescents.
The main character’s name is Bart. He is 13 years old and lives with his mother in an apartment building that could use some restoration work. But Bart doesn’t think that adopting a negative attitude makes life any better. He attends boxing classes because his mother wants him to toughen up, and he has a secret hobby. The book also introduces us to Ada, who can’t keep a secret, Geir, whose knees are oddly bent, and a number of other persons who have or will have a place in Bart’s life. The Ballad of a Broken Nose is about hitting – and not hitting. It’s also about singing without anyone hearing you. The book will make you laugh. It will make you feel uneasy. And it will make you laugh again. But most of all it touches upon the important days in life, days when everything seems to happen at once and nothing will ever be the same again. 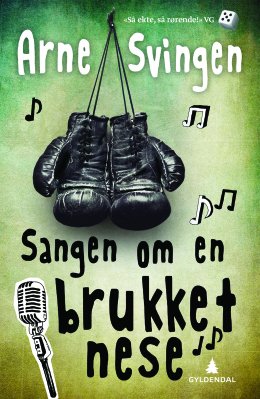 ‘(…) an unusually exciting and funny story about an unusually sad teenage life. The language and characters are highly realistic, and the book is packed with striking one-liners and singular events.’

‘… addresses difficult subjects with a gentle hand and understated humor.’

‘down to earth and honest (…) guaranteed reading pleasure.’

Arne Svingen has written many books for children, adolescents and adults. His breakthrough as a writer of thrillers came with Silent Screams (2001). He was awarded the Brage Prize for his adolescent novel Black Ivory in 2005.