Norwegian Folktales is a collection of Norwegian folktales and legends by Peter Christen Asbjørnsen and Jørgen Moe. It is also known as Asbjørnsen and Moe, after the collectors.

The work’s popularity is partly attributable to Norway’s newly won partial independence, and the wave of nationalism that swept the country in the 19th century; and the Norwegian written language they contributed to developing (i.e., what would become Bokmål); their language style struck a balance: it was a national language distinct from the Danish of their overlords, but more dignified and refined than the rustic rural dialect in pure form.

Asbjørnsen and Moe was inspired by the German folktale collectors, the Brothers Grimm, not merely to emulate their methodology, but drawing encouragement by that their endeavor was a work of national importance, especially as the Grimms openly gave high praise for the Norske folkeeventyr. Asbjørnsen and Moe applying the principles espoused by the Grimms, for instance, using a simple linguistic style in place of dialects, while maintaining the original form of the stories. Moreover, Asbjørnsen and Moe did not publish collected folktales in the raw, but created “retold” versions, seeking to reconstruct the lost Urform of the tales — although the alterations performed were not as drastic as the Grimms sometimes allowed license for themselves. The Norwegian pair also collected tales from the field themselves, in contrast to the Grimms. 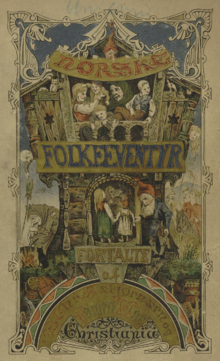 Asbjørnsen, a teacher, and Moe, a minister, had been friends for about 15 years when in 1841 they published the first volume of folktales – the collection of which had been an interest of both for some years.