T. Parvela and B. Sortland

Overpopulation has caused earth’s natural resources to diminish and people are struggling to survive. Thirteen-year-old Ari is looking after his little brother Joni, who has fallen ill with a mysterious virus. The boys manage to get hold of a copy of Kepler62, the newest computer game that everyone’s talking about and which is supposed to be almost impossible to complete. Working together, the brothers manage the impossible and they soon discover that Kepler62 is more than just a game. It’s an invitation – one that the boys will accept.

An award-winning series about a group of children who are sent away to investigate whether the distant planet Kepler62 is capable of sustaining life, because earth’s resources are diminishing at an alarmingly fast rate. Their story is gripping and moves from one book to the next with cliff-hangers at the end of each instalment. 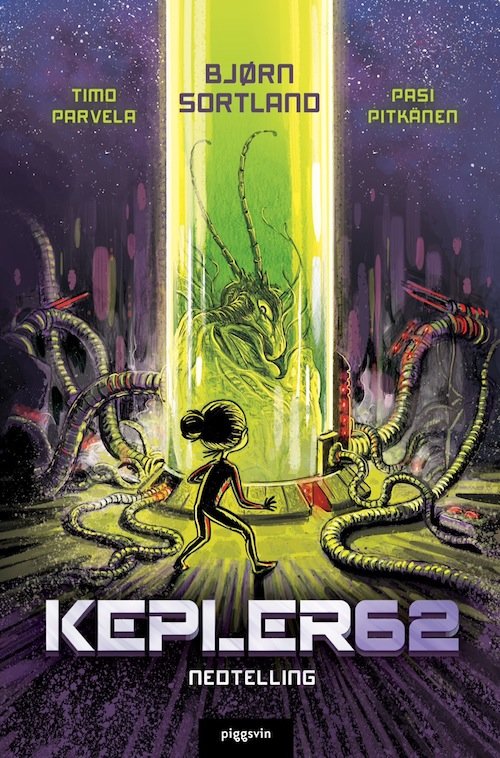 ‘The series gets off to such a flying start that you can’t help but be absorbed into its far from ordinary world.’

‘Parvela and Sortland bring up many themes that add depth to their dystopia, while the book is still primarily an entertaining and fast-moving novel. (…) it also draws in the kinds of kids who tend not to enjoy books. (…) After all, who doesn’t love a well-written adventure?’

Authors Timo Parvela from Finland and Bjørn Sortland from Norway, together with Finnish illustrator Pasi Pitkänen, have created a fascinating world where friendships are put in the balance in the unexplored reaches of outer space. These books are being published simultaneously in Finland and Norway.

Bjørn Sortland (b. 1968) is an award-winning Norwegian author whose many works include picture books as well as children’s and YA novels. His books have been translated into more than 20 languages. Sortland’s writing is suffused with humour, while his books also take the problems typically encountered by children and young people seriously.