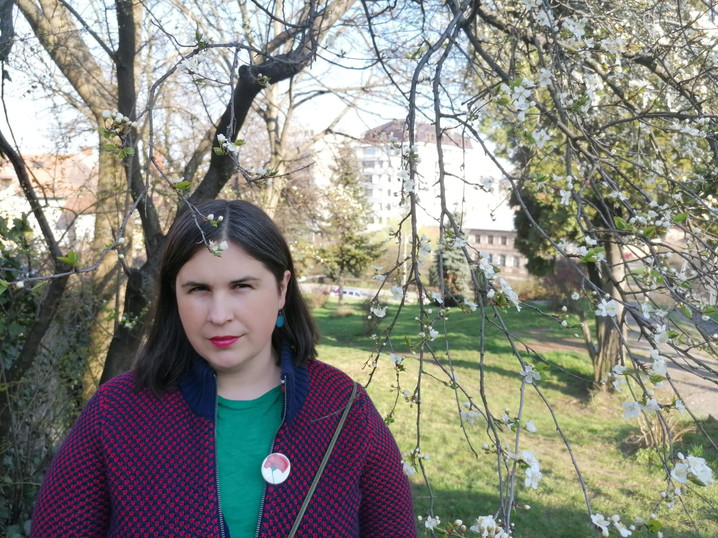 January’s translator of the Month is Roxana-Ema Dreve, who translates fiction from Norwegian and Swedish into Romanian and has, among other things, translated Karl Ove Knausgård’s My Struggle 3. In addition to being a translator, Roxana works as an associate professor at Babeș-Bolyai University in Cluj, Romania, where she is currently head of the Department of Scandinavian Language and Literature. Her latest translation is Maja Lunde’s novel for young adults, Battle, which will be published at the beginning of 2023.

In our interview, we asked Roxana:

Do you have a favourite Norwegian word and/or a possible “nightmare word”?
Yes I do! I like the words “kirsebær” [cherries] and “jul” [Christmas] which to me are almost like one word. My mother loved cherries and whenever I hear the word I picture her smile, and then get this unique feeling that I can’t describe in words, but it’s something that for me represents childhood: a home, full of carol singing and birthday wishes – it was my mother’s birthday on Christmas Eve.

Do you have a special Norwegian book that is close to your heart? If so, why is it special to you?
There are many Norwegian texts that I like very much, such as Jon Fosse’s Morning and Evening, Henrik Ibsen’s The Master Builder, Lars Aamund Vaage’s Sing (original title Syngja) or Per Petterson’s I Curse the River of Time, but if I had to choose one, it would have to be Olav H. Hauge’s Collected Poems (original title: Dikt i samling).
I like taking walks in the forest, eating apples, enjoying nature and the mountains and writing poems myself, and whenever I read his poetry it’s like I’m both here and there, in the wonderful world that he reflects. Hauge’s poetry was my first encounter with Nynorsk and Western Norway and it made a big impression on me. I hope that one day I can translate his work into Romanian.

Learn more about Roxana on Books from Norway

Read about the (history of the) Department of Scandinavian Languages and Literatures of the Faculty of Letters, the Babeș-Bolyai University in a interview with professor and former director Sanda Tomescu Baciu.