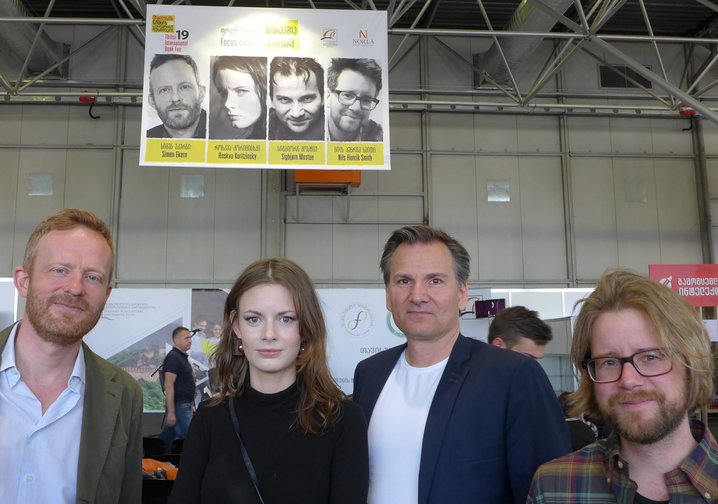 From the book fair in Tbilisi.

Tamar is also a translator. She was NORLA’s translator of the month for May. You may read our interview in Norwegian with her here.
She is pictured holding her brand new translation of Arne Svingen’s The Ballad of a Broken Nose for the very first time.

Roskva Koritzinsky, Nils Henrik Smith, Simen Ekern and Sigbjørn Mostue all delivered lectures to the students. Here, they are pictured with some of the seminar participants.

Deep dive into the texts
The four authors also took part in group work with the students, who had done translations of their texts. This led to many interesting discussions, because there’s a lot to think about when it comes to translating!

“What kind of monster is a gravbøyg?”, “How big is a nisse?” the students asked Sigbjørn.

“Can “røykelse” mean marijuana as well as incense in Norwegian?” Simen was asked.

Nils Henrik is pictured here talking about the magic of cross-country skiing in general and the 1994 relay race at Lillehammer in particular.

One topic that generated heated debate in Roskva’s group was how to give a single word like “knulle” the right nuance in Georgian.

Georgia is famous for its wine, which is fermented in clay jars, as well as for its polyphonic singing and sumptuous cuisine. Our four New Voices sampled all of these after the seminar and book fair.

A well-fed, happy Nils Henrik takes a rest at one of Tbilisi’s wonky cafes the evening before the trip back home.

Text and all photos: Dina Roll-Hansen.

Curious about which Norwegian books have been published in Georgia recently?
Here are the covers of books that were published with translation support from NORLA (up to and including 2011).

NORLA’s Senior Adviser Dina Roll-Hansen has written an article in the Norwegian daily Klassekampen about Georgia and Georgian literature.
The article (in Norwegian only) may be downloaded below.

In 2018, Georgia will be Guest of Honour at the Frankfurt Book Fair.
Read more.

Interested in reading more of NORLA’s letters from abroad?
Now we’ve collected all the articles here.