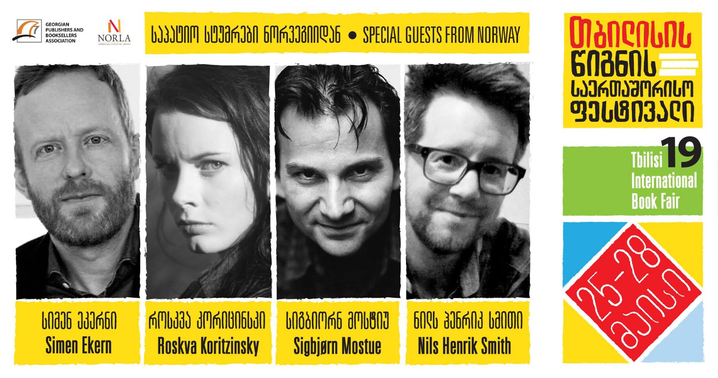 Norway is this year’s country in focus at the Tbilisi International Book Fair in Georgia!

A seminar for Georgian students of Norwegian as well as Georgian translators will be held Wednesday May 24. Organizing the seminar are TSUs Centre of Scandinavian studies and NORLA. Approximately 40 participants will take part, including four translators from Baku in Azerbaijan.
The main organizer of the seminar is translator Tamara Kvizhinadze, who is also NORLA’s Translator of the Month in May. If you happen to read Norwegian, you will enjoy our interview with her here.

All four authors in NORLA’s authors’ programme “New Voices” will speak at the seminar:
Roskva Koritzinsky: “The short story in Norwegian contemporary literature”
Nils Henrik Smith: “Dag Solstad and the Norwegian”
Sigbjørn Mostue: “Back to the roots – the revival of popular beliefs in Norwegian fantasy literature”.
Simen Ekern: “The battle for the soul of Europe: The growth and the future of right wing populism”.

The seminar participants will work in groups discussing the translation of the four authors’ texts.
After the seminar the participants are invited to a reception along with Georgian publishers and contacts, hosted by Norwegian embassies in Tbilisi and Baku.

Thursday May 25 sees the opening of the Tbilisi International Book Fair where Norway is focus country.
The four Norwegian authors will take part in several events. Simen Ekern will meet Lasha Bugadze to discuss politics and literature: «Are the politicians afraid of writers?». Nils Henrik Smith will meet Dato Turashvili to talk about football: «Literary goals». Roskva Koritzinsky will meet Salome Benidze to talk about identity and language: «The Road: Words and humans». Sigbjørn Mostue will meet Zaza Koshadze to talk about the choice of genres: «Why fantasy?».

On Friday May 26, NORLA will take part in a debate about being Guest of Honour at the Frankfurt Book Fair. Georgia is Guest of Honour in Frankfurt in 2018.
All Norwegian participants will be presenting short talks about their oevre and about Norwegian literature at a book fair event Friday night.

Read more about both the four “New Voices”-authors here.

More about the international book fair in Tbilisi here.

Read more about the TSUs Centre of Scandinavian studies here.