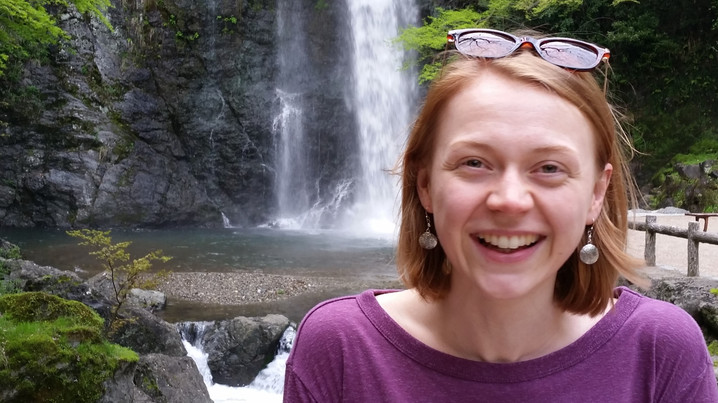 June and July’s translator of the month is Rosie Hedger, who translates from Norwegian into English. Rosie Hedger was born in Scotland and completed her MA (Hons) in Scandinavian Studies at the University of Edinburgh, as part of which she spent a year at the University of Oslo taking courses in Norwegian literature and researching for her dissertation on contemporary Norwegian fiction. Since completing her studies, Rosie has lived in Sweden and Denmark, and she is now based in the north of England. Her translation of Gine Cornelia Pedersen’s Zero was shortlisted for the Oxford-Weidenfeld Translation Prize in 2019, and her translation of Agnes Ravatn’s The Bird Tribunal won an English PEN Translates Award in 2016. Her translations of Marie Aubert’s Grown Ups and Helga Flatland’s One Last Time are both due out this summer.

How did you start translating Norwegian literature?
I started working on translation samples for Norwegian agencies while still a student after my university Norwegian tutor (and fabulous fellow translator) Kari Dickson passed my name onto some of her contacts. Studying Norwegian at university was a revelation for me – I had learned French at school for a few years, the only language on offer to me there, and though I loved it, progress was so slow and teaching was so focused on the dull mechanics of grammar. The opportunity to choose to study almost any language I could think of at university was amazing, and to reach the point that I could actually read books written in that language was such a breath of fresh air. The Norwegian literary scene is so active and diverse, and I still pinch myself that I get to do the work I do – I wouldn’t have believed it possible all those years ago, wandering through the Oslo University library and trying to decide what to read next.

Your Austrian colleague Andreas Donat had the following question for you: “What’s the most beautiful sentence you’ve ever translated from Norwegian into English?”


Thank you so much for your question, Andreas, and what an impossible one it is! One sentence feels impossible to pin down, but I did love translating the forest scenes in Agnes Ravatn’s The Bird Tribunal and still recall them very clearly, particularly this section:

“Just a few days ago the trees had been bare, but now the scent of tiny, wet, bright-green buds tickled at my nostrils, the air cold and crisp. All around me I could hear the sound of miniature drops falling on leaves, the forest floor soft and damp, roots criss-crossing underfoot surrounded by club moss and ferns.”

That book’s setting is practically a living, breathing character in its own right, at times welcoming and at others menacing – I really relished working on those scenes.

What are you translating at the moment?
I’m currently on maternity leave with a three-month-old baby to wrangle, so I’ll be back at work towards the end of the year. I’m finding this a good time to catch up on reading, which is often one of the first things to fall by the wayside when I’m caught up in working on translations. It’s nice to have the headspace to enjoy books that have nothing to do with ‘work’ – it can be hard to strike a balance when your job is so interlinked with something you enjoy doing. I like catching up with fellow translators’ work too – that can be very inspiring. It will be nice to have new and varied literary references to draw upon when I return to work, and hopefully a few new Norwegian titles I can suggest to English publishers too.

Is there any particular Norwegian book that’s close to your heart? If so, what makes it so special?
Erlend Loe’s Tatt av kvinnen (Gone with the Woman) will always hold a special place for me – it was one of the first Norwegian books I read and understood in the early years of my studies. A few years ago, I was commissioned to translate a sample of the book for the Norwegian publisher – it was enormous fun working on something humourous, but it also felt like a significant milestone for me, working on a text that had played an important role in my introduction to the Norwegian literary scene.

What would you be if you weren’t a translator?
If I weren’t a translator, I’d probably be teaching – I used to work in a university teaching English to international students, and I really enjoyed seeing them improve week by week and watching their confidence grow. Working in a university had its advantages too – I was able to take language courses for free, so I dabbled in beginners Italian and Mandarin. It was useful to be reminded of the early stages of learning a language and how daunting it can be. It’s something that is equally relevant for translation, I think, to remember how alienating it can be to encounter another culture in a text, such as foreign names and cultural concepts and environments – I feel quite strongly that part of a translator’s role is to ease the introduction to new concepts and environments for readers who may be unfamiliar with them.

What is the best thing about being a translator?
I really like the fact that there’s a lot of variety in the work that I do, whether in terms of translating different genres, or working on a first draft versus a final edit, or translating a whole novel versus a shorter sample. I also love the chance to work with other translators, which is ironic given how solitary translation can be as a career! I love catching up with my peers, exchanging experiences and advice, co-translating or workshopping texts together to see how differently we handle the same things. There is a strong sense of solidarity between translators, and I’m very grateful for that.

What is a normal workday like for you?
I work best in the mornings and like to get started as early as I can to make the most of that natural sense of motivation. I’m never as productive in the afternoons, but unless I have a pressing translation deadline, I find it’s a good time for following up on emails and all the other admin tasks associated with freelancing.

Do you listen to music while translating, and if so, what?
I like background noise of different kinds at different stages – some ambient or classical music for working on first drafts is always nice, anything that won’t distract me too much, and preferably without words (for fear they might accidentally end up in the translation as I half-heartedly sing along!). For the editing stages, I like playlists of forest sounds or the sound of rain – I find it weirdly soothing and surprisingly good for helping me to focus.

We hope you’re ready to pass the baton to a colleague who also translates from Norwegian. Who would you like us to hand off to, and what would you like to ask them?
I’d like to pass the baton to Karolina Drozdowska. She and I have both translated the work of Marie Aubert into our respective languages, so I’d like to know: «Karolina, what was the biggest challenge you faced in translating Aubert’s work into Polish?»

Learn more about Rosie on Books from Norway and also on her homepage.

Sámi literature on the rise